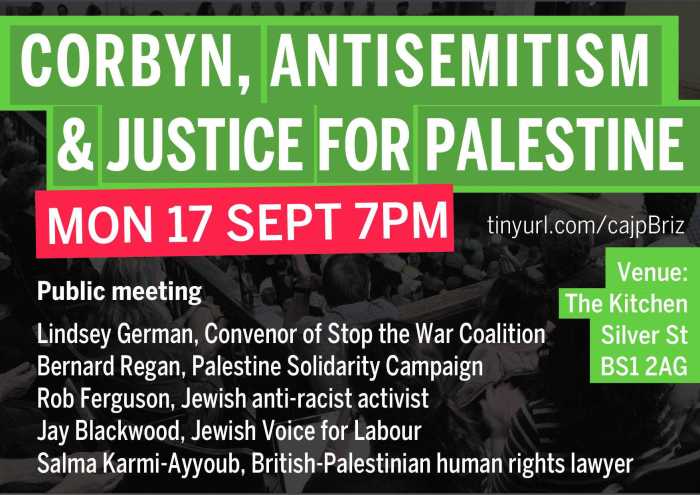 The introduction to the meeting from Stop The War Coalition states “Criticism of Israel is being conflated with antisemitism in ways that threaten free speech and the right to protest while silencing Palestinian voices. We must vigorously oppose all forms of antisemitism, but we can’t let smears be used to silence criticism of the Israeli state.”

The introduction goes onto explain that –

“Jeremy Corbyn – a lifelong anti-racist in all respects and prominent figure in the Palestine solidarity movement – is being labelled an antisemite and a racist by those who oppose his politics and leadership of the Labour Party.

“This meeting will discuss the importance of challenging any attempt at a witch hunt, strengthening the struggle for Palestinian freedom while maintaining zero tolerance for antisemitism and all forms of racism.

“In order to cover the costs of the venue we will be asking for donations on the door for those who are able to afford it. The venue has a large capacity so let’s make it a big meeting.”

This event is organised by Bristol Stop the War Coalition.

Pro-Palestinian activist Jackie Walker, who was suspended from the Labour Party for alleged antisemitism, performs her one-woman play

Buy tickets from eventbrite by following this link The Lynching.