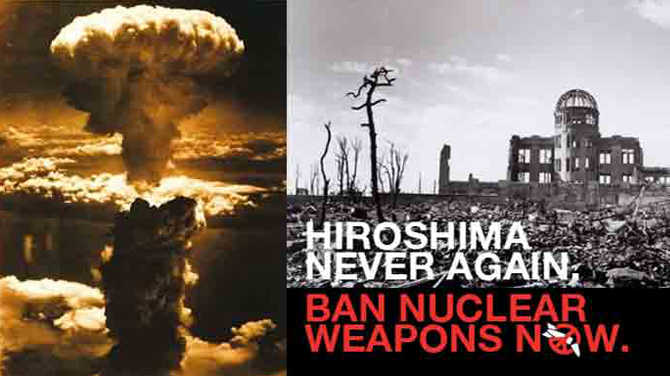 Gather at the Japanese White Cherry tree that CND planted to mark the 70th anniversary of the bombings in 2015.
There will be invited speakers and a statement from the Mayor of Hiroshima will be read out.
Bristol’s Red Notes Choir will be singing at about 18.00.
Please bring along anything appropriate that you would like to read aloud.

This event has been organised by Bristol CND.

This will be Bristol’s main act of remembrance, but there will also be a brief quiet vigil at the cherry tree in Castle Park on Tuesday 6th August at 17.00, Hiroshima Day.

On 6 August 1945, the US dropped an atomic bomb called “Little Boy” on Hiroshima in Japan. Three days later a second atomic bomb (“Fat Man”) was dropped on the city of Nagasaki. These are the only times nuclear weapons have been used in war.

General Dwight Eisenhower said at the time that as Japan was at that very moment seeking some way to surrender with minimum loss of face, ‘it wasn’t necessary
to hit them with that awful thing.’

Please come and join Bristol’s vigils to remember the horror unleashed in 1945 and to show that those who died as a result of the nuclear attacks have not been
forgotten and that we are determined to rid the world of nuclear weapons to prevent it ever happening again.